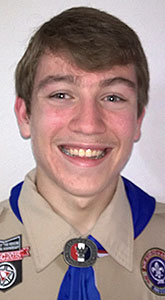 The Congress is an honors-only program for high school students with a minimum 3.5 GPA who are passionate about science, technology, engineering or mathematics (STEM). The purpose of this event is to honor, inspire, motivate and direct the top students in the country who aspire to be scientists and technologists to stay true to their dream and, after the event, to provide a path, plan and resources to help them reach their goal.

Will Smith was formally nominated by American hero and astronaut, Buzz Aldrin, Science Director of the National Academy of Future Scientists and Technologists, to represent Lake Travis High School, based on his academic achievement, leadership potential, and passion for science and technology.

During the three-day Congress, Smith will join students from across the country and hear Nobel Laureates and National Medal of Science Winners talk about leading scientific research, be given advice from deans of the world’s top tech universities, be inspired by teen science prodigies, and learn about future advances and breakthroughs in science and technology.

“This is a crucial time in America when we need more nimble-minded and creative scientists and technologists who are even better prepared for a future that is changing exponentially,” said Richard Rossi, Executive Director, National Academy of Future Scientists and Technologists. “Focused, bright and determined students like Will Smith are our future, and he deserves all the mentoring and guidance we can give him.”

Smith was recently inducted into the National Honor Society (NHS), one of the nation’s forerunners in the recognition of exceptional high school students. Inductees must have demonstrated sustained commitment to the four NHS ideals of Character, Leadership, Scholarship and Service. They also must maintain a minimum GPA of 3.4.

Smith is active in the Boy Scouts of America (BSA). He is an Eagle Scout in Troop 1010, Capitol Area Council, and a member of the BSA Order of the Arrow, a service organization that is the Boy Scouts’ national honor society.

“I understand that the relentless introduction of new technology creates anxiety in our societies. I am passionate about helping people master using technology to improve their lives. My goal is to be a leader in an innovative, world-class technology company when I graduate from college,” said Smith. “Since my earliest memories, I’ve known that through learning about technology, I can help others. I am looking forward to attending the Congress, learning from the speakers and networking with some of our future science and technology leaders.”

The theme of the June 2015 Congress is “Greatness Awaits,” and will feature presentations by and opportunities for attendees to network with a roster that includes:

About the National Academy of Future Scientists and Technologists

The Academy offers free services and programs to students who have the desire to learn more about their future in science or technology. Some of the services and programs the Academy offers include online social networks through which these future scientists and technologists can communicate; opportunities for students to be guided and mentored by tech and science leaders; and communications for parents and students on college acceptance and finances, skills acquisition, internships, career guidance and much more.

The Academy was founded on the belief that science, technology, engineering and mathematics (STEM) education plays a critical role in enabling the United States to remain the economic and technological leader of the global marketplace of the 21st century and that we must identify prospective talent at the earliest possible age and help these students acquire the necessary experience and skills to take them to the doorstep of vital careers.

Based in Washington, DC and with an office in Boston, MA, the Academy was chartered as a nonpartisan, taxpaying institution to help address this crisis by working to identify, encourage and mentor students who wish to devote their lives to advances in society as scientists, technologists, engineers and mathematicians.